Composer builds now require Android SDK to be version 26 (Released in 2017). This change depreciates support for Android 6 & 7 devices and sets the minimum version to Android 8 Oreo.

The keystore file is used to securely and uniquely sign your app binary, so that e.g. other apps can't pretend to be an update for your app.

For example, submitting an update to Google Play requires that the new app binary has been signed with the same keystore file as the original build.

To generate a keystore file, the easiest way is to use the Java keytool (you need install JDK for this).

Run the following command in your Terminal or Command Prompt (replacing my-app-name appropriately) .

You then need to input a password required to use the keystore. The owner, city etc. data are not necessary, but you can fill them in if you want. You ca enter a separate password for the alias, but that's not necessary either.

In Composer on the Keystore tab, you have the following fields:

This setting defines the unique package identifier for your binary APK package. It must be in reverse domain format, e.g. com.appgyver.myapp.production.

This is the name for your app shown under the app icon in the device home screen, as well as in settings and other places.

A URL Scheme enables the user to launch your app via a hyperlink from an external app or website. For example, if you try to open Google Maps via your phone's browser, you will be presented with a prompt asking if you want to open the app instead.

Define the URL scheme via this universal format: scheme://

On the Build Settings page you can choose a runtime version and set the version properties for the build. 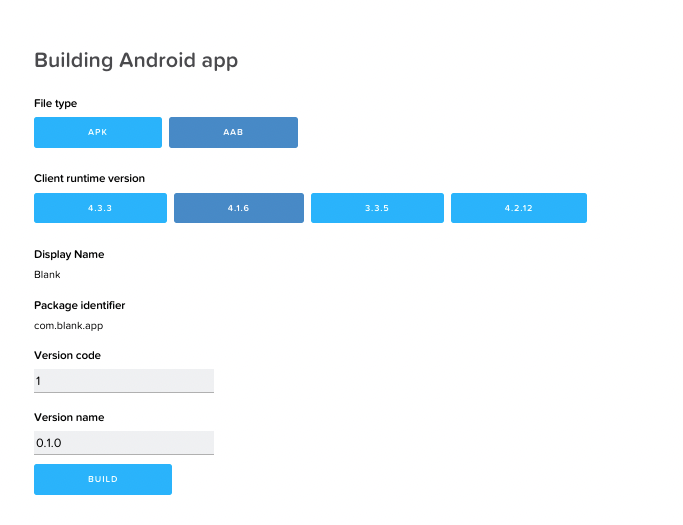 AAB - Android App Bundle is only for publishing and contains the entire program code of the Android app. It cannot be used to install apps on Android devices, but is used to optimize the size of a build.

Since August 2021, Google Play is requiring new apps to be published with the Android App Bundle (AAB).

Internal version code for the app, given as an integer, e.g. 10000. When you publish an update to your app in Google Play, its version code must be higher than previous version codes.

Semantic version name for the current build, e.g. 1.0.0. Shown in device settings and other places.

Why is the file size of Android builds so big?

Our Build Service produces what is called fat binaries. In short, the binary includes optimized support for several different processors. This makes the size of the build to be large even when the app is only a one page application.

If you have built an AAB and intend on uploading your app to Google Play, this fat binary will be processed by Google Play in such a way that the app your users download includes only the support for the device they are using. Thus the app size each user downloads and installs is smaller than the original AAB file. Please check out this guide by Google Play on how to see the actual download and install size of your application.

For APK, we aim to provide an option to build only a generalized apk to reduce the file size alongside the fat APK version available currently.

Check out this guide.

The APK package generated by the Build Service is essentially the same as you would get building an app with Android Studio manually.

You can install it on your device with an USB cable, upload it somewhere and share it as a direct-download link, publish it via Google Play or use a mobile app management solution to manage distribution.

Was this article helpful?
Thank you for your feedback! Our team will get back to you
How can we improve this article?
Your feedback
Comment
Comment (Optional)
Character limit : 500
Please enter your comment
Email (Optional)
Email

By using this site, you consent to the use of only necessary cookies to enhance your site experience and improve our services.